Interview & Edit by Digitimes A single-board computer (SBC) incorporates microprocessors, memory, and input/output (I/O), among other features on a single circuit board. It provides industrial control or commercial IoT developers with a straightforward mode that simplifies the process and reduces the high costs of developing their own hardware, thereby accelerating time-to-market. Currently, SBCs are generally mature, powerful, and easy to use. SBCs can help industrial/commercial end customers and system integrators to quickly create products for various applications.

In recent years, market acceptance of ARM-based SBCs has risen. According to Abbey Chen, Product Manager of ASUS Tinker Board, this is mainly due to improved performance and lower power demand. Moreover, ARM processors are not only used for mobile or embedded applications in the industrial control and commercial markets; nowadays, ARM usage has entered new areas such as PCs, high-performance computing, deep learning, and more. Abbey Chen said that the ASUS Tinker Board is equipped with the latest, most powerful quad-core ARM-based processor, which provides "best in class" performance.

The ASUS Tinker Board is one of the most popular products in the ARM-based SBC market. An exploration of the reasons behind its success showed that its first advantage is its supply cycle of more than 5 years. Thanks to this, developers can stop worrying about default risks due to delayed deliveries or having to switch to alternative materials. To avoid these issues, ASUS provides a long-term and stable supply, so that developers can avoid the high costs of manpower and materials required for the development and verification processes of introducing new SBCs due to supply shortages.

It is worth mentioning that in the past two years, the global parts shortage has continued to worsen, which highlights the advantages of Tinker Board. ASUS has a close relationship with its parts suppliers, and has thus been able to establish a stable source of parts to ensure that the Tinker Board supply will not be affected.

Second, ASUS is one of the few SBC suppliers who are familiar with the underlying architecture of Android and can provide strong technical support for it. Most application developers are proficient in the development of high-level Android apps, but not necessarily in how to adjust the app based on the SBC hardware functions or the underlying architecture of the operating system. Thus, SBC manufacturers need to provide customized development or optimization services; this is one of ASUS' strengths. In particular, ASUS provides dedicated on-site technical support engineers for each customer to offer nearby support. This can shorten the customer's development cycle and accelerate application deployment. Thus, this service is well received by customers.

eMMC on Board: Better Reliability and Performance

Since its launch in 2017, Tinker Board has produced a large number of IoT application cases. For example, many retailers use Tinker Board-based digital billboards because they take the quality of advertisement playback and display stability very seriously, and Tinker Board eMMC on Board design's provides higher reliability. Moreover, Tinker Board is also widely used in smart cities, smart hospitals, and smart factories. Applications include digital billboards for bus stops, outpatient check-in machines in hospitals, and IoT gateway applications such as tracking for smart warehouses and renewable energy storage monitoring, etc.

Most system integration partners in the aforementioned vertical application fields tend to give priority to Tinker Board, due to several factors. Abbey Chen said, first of all, most development board suppliers provide technical consulting services through online forums, which force customers to disclose development details online. On the other hand, concerns about information leaks are eliminated with Tinker Board's dedicated FAE service.

Second, Tinker Board not only supports Linux (Debian), it also supports Android, which is not supported by many SBC suppliers. Customers have more options to choose from and can create the most suitable operating environment according to their application requirements or programming habits.

Moreover, Tinker Board is one of the very few SBCs with an eMMC memory soldered directly onto the board. Therefore, customers can install the operating system on the eMMC instead of the Micro SD memory card to eliminate the risk of poor slot contact. In addition, the on-board eMMC was found to be able to withstand more than 3,000 write/erase cycles after testing, far exceeding the 300 to 500 of a Micro SD slot, and with better reliability. The on-Board eMMC also features superior write and read performance, which are 6% and 32% higher than that of Micro SD cards, respectively.

More importantly, ASUS has strictly selected and configured relatively high-quality SoCs to ensure Tinker Board's outstanding performance. The CPU performance of the first Tinker Board, which was born five years ago, is still comparable to the latest competing products of today.

How does the CPU performance of the latest Tinker Board 2 (ARMv8 6-core SoC based) compare with competing products? The technical editing team of DIGITIMES conducted a test using the Geekbench 5 benchmark. The results showed that Tinker Board 2 has a CPU speed of 298Mbps and 806Mbps under different single-core and multi-core conditions, which are 1.5 and 1.35 times higher than those of competing products, respectively. Then, the team used the glmark2 benchmarking software and ran a test under the same visual computing load. The results showed that the GPU speed of Tinker Board 2 is 787 Mbps, which is 73% higher than the 456 Mbps of competing products.

In addition to the aforementioned advantages such as stable supply, complete technical support from FAEs, and outstanding performance, Tinker Board also has many other features that add to its value. For example, ASUS created the Tinker Board forum, shared the open source code on GitHub, and provided a comprehensive User Guide and Developer Guide to help users who don't have a software engineer background install the OS and adjust the boot settings; in addition, ASUS assisted people with an R&D background in building their own Android or Debian operating environment and convert the preset GPIO to I2C, UART or I2S as needed.

Furthermore, developers can manage Tinker Board with the ASUS IoT Cloud Console (AICC) for more efficient operations and maintenance. For example, administrators can connect to the AICC via a computer or mobile phone anytime, anywhere to check the status of Tinker Board, as well as the sensor data connected to Tinker Board; they can also control Tinker Board through remote commands. Essentially, developers can easily access the rich functions Tinker Board provides to quickly turn ideas into reality.

It is worth mentioning that in the past two years, the global parts shortage has continued to worsen, which highlights the advantages of Tinker Board. ASUS has a close relationship with its parts suppliers, and has thus been able to establish a stable source of parts to ensure that the Tinker Board supply will not be affected. Source:https://www.digitimes.com/news/a20220531PR201.html?chid=9 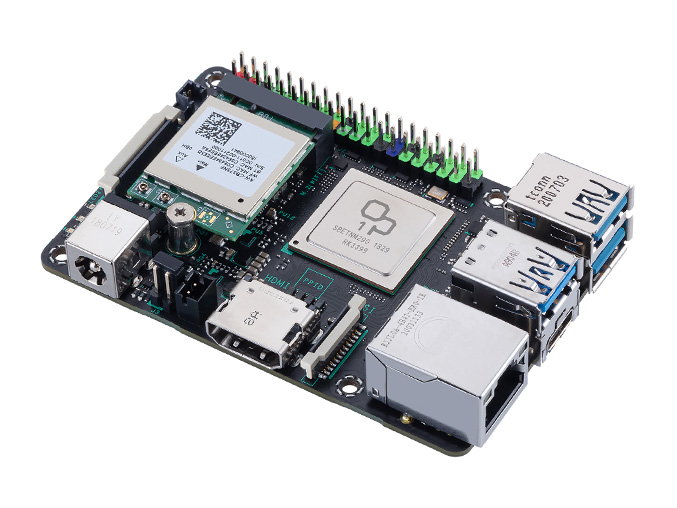